Blog full of news and tips

I have a confession to make. I have a love-hate relationship with XLIFF. The idea of an interoperable standard for translations is a simple and brilliant one. I can almost see XLIFF documents seamlessly flying through the translation space from one CAT tool to another. No loss of data, no friction whatsoever.

Alas. Enter extensibility. The 1.2 standard allows for implementers to add custom namespaces to fill in the gaps where the standard was lacking. And boy, did implementers embrace this extensibility. Almost every major CAT tool has its own namespace to provide for missing or difficult to implement features and you really can’t blame them.

But extensibility has led to alternative approaches to methods that do exist in the standard and some vendors even refuse to publicly document their extensions, voiding the whole interoperable idea of XLIFF. It makes our job a lot more difficult as we now have to deal with various XLIFF flavours instead of one solid XLIFF standard.

Imagine my surprise when I started looking at the XLIFF export from Catalyst 11. It has no custom namespace and it follows the standard perfectly so far as I have seen in my initial tests.

So, we’re very glad XLIFF exports from Catalyst 11 can be perfectly processed in QA Distiller with additional support for ignoring and reporting translation units. 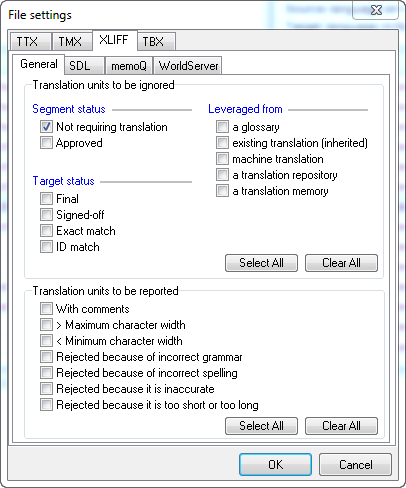